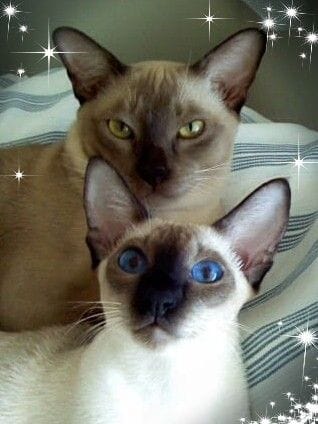 Sue has been breeding top quality Burmese & Siamese Kittens for many years under the registered prefix “ORAMOR” in Maryborough, Queensland, Australia and has gained the respect as being a reputable and extremely responsible and dedicated cat breeder.
Sue’s primary aim is to breed healthy, robust kittens with loving,
people-oriented, ultra-affectionate purrsonalities.

The health and well-being of Sue’s cats/kittens is paramount as her web site will testify!

Sue’s Burmese & Siamese Kittens are lovingly raised with pride and your happiness at heart! 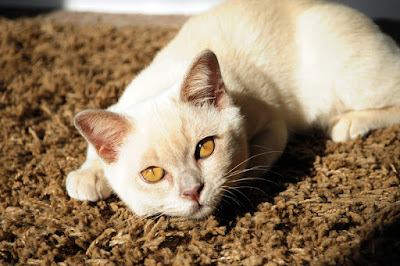 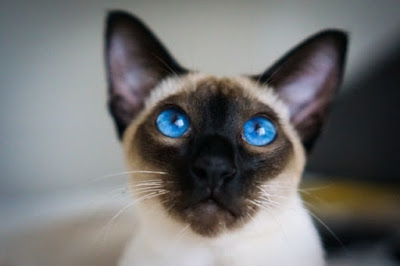 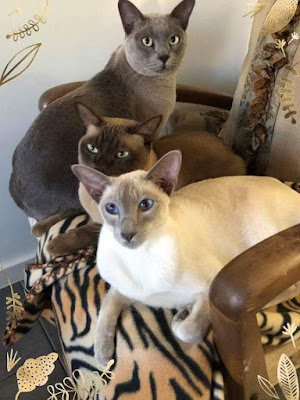 Howard Thrift
100% agree such beautiful cats from Oramor, we have one Siamese and one Burmese from Sue and they are wonderful examples of the loving care in which they are raised as kittens .
Posted by Oramor Burmese and Siamese Kittens at 16:46 3 comments:

Kittens sold as quality pets and are to be neutered/spayed.
Oramor Burmese kittens - the ideal family pet!

To be placed on file to be notified when Oramor Burmese kittens are available, include your colour, gender preference along with your location and mobile number.
email: oramorkittens@bigpond.com

PLEASE NOTE:  Due to strict Bio Security regulations in forced, visitors are not allowed, or anyone other than myself to handle kittens until after they have had their first  vaccination which take place at eight weeks of age.... Kittens have a developing immune system and must be protected. 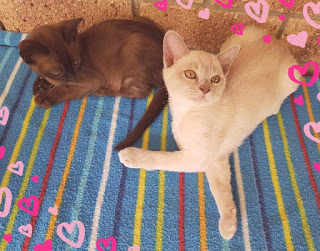 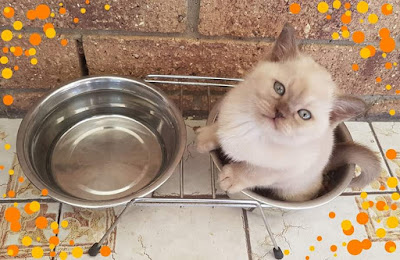 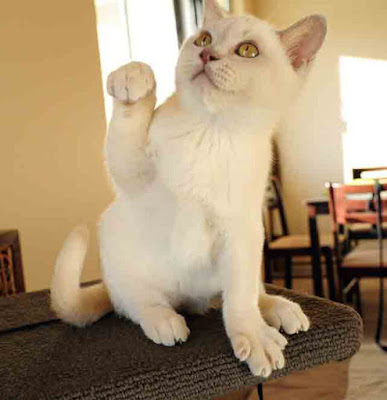 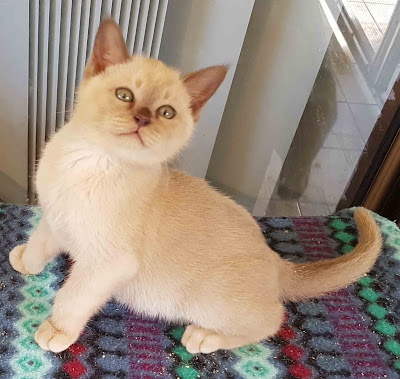 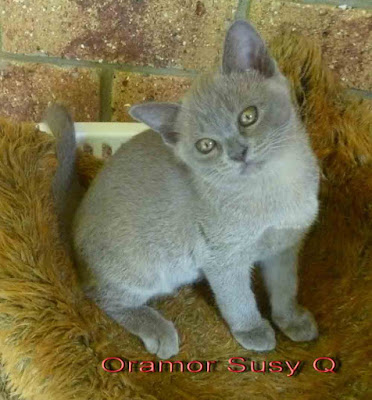 Posted by Oramor Burmese and Siamese Kittens at 16:42 2 comments: 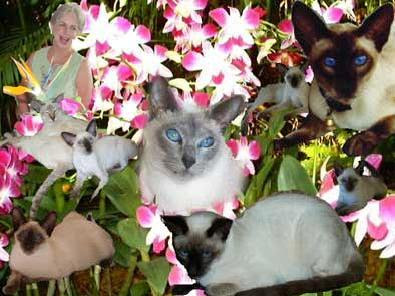 Please email oramorkittens@bigpond.com to be placed on file to be notified when Oramor Siamese kittens are available. Include location, mobile number, gender and colour point preference. 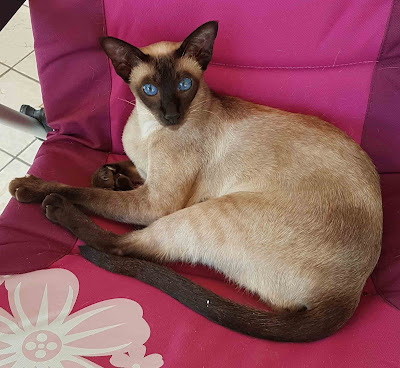 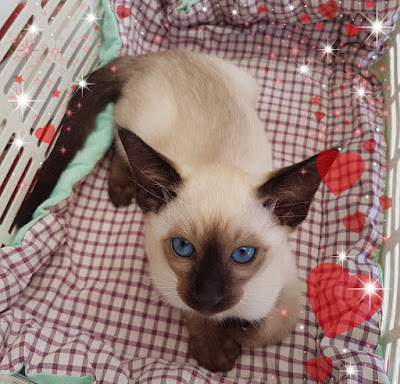 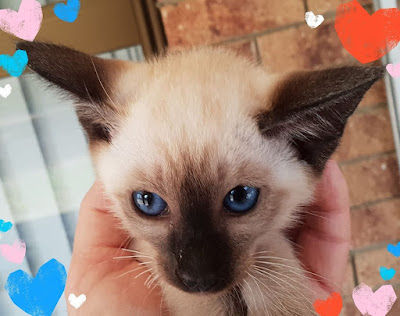 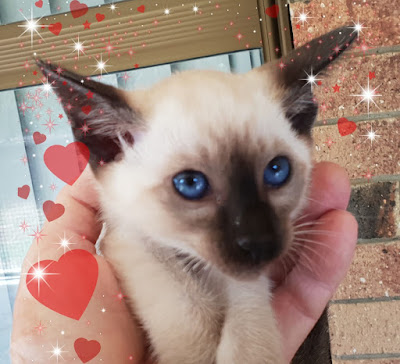 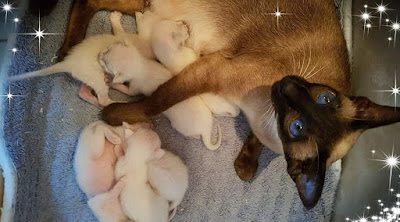 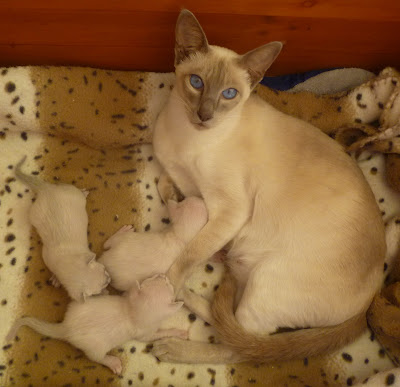 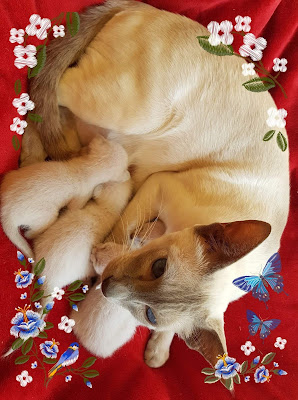 ."Oramor " Siamese Kittens are lovingly raised with pride and your happiness at heart.


Life will never be dull if you are owned be an "ORAMOR" Siamese!


Extraordinarily intelligent and inquisitive, this fur-person is an energetic and playful companion.


Looking like porcelain figurines, these cats are truly living, breathing works of art!

Enquiries are most welcome -

Our Visitation Policies:-
PLEASE NOTE:  Due to our strict Bio Security regulations we have in force, we do not allow visitors, or anyone other than ourselves to handle kittens until after they have had their first vaccination which take place at eight weeks of age.....Kittens have a developing immune system, and must be protected. 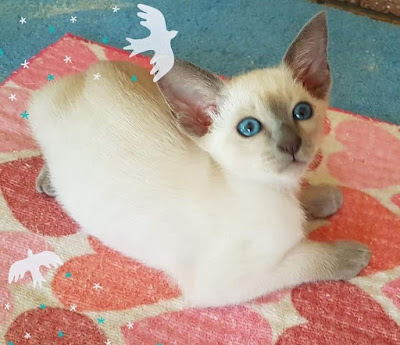 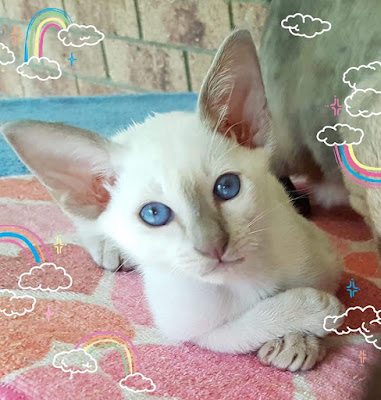 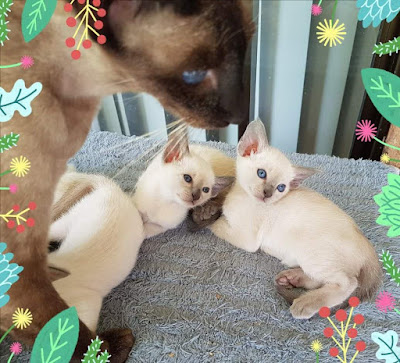 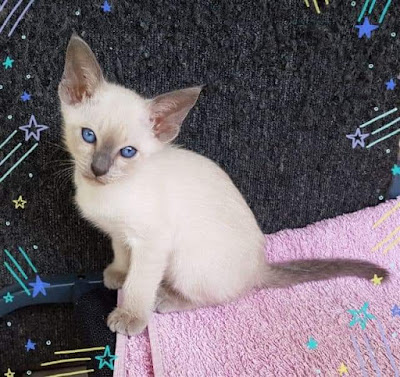 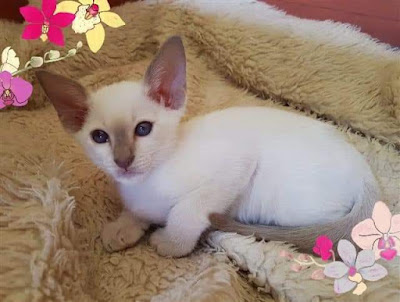 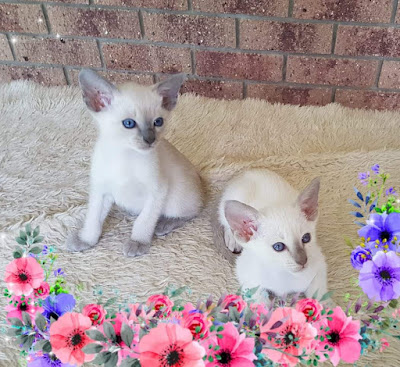 Sue's Sueperb Siamese Kittens, lovingly raised with pride and your happiness at heart.
Life will never be dull if you are owned by an "ORAMOR" Siamese!

Extraordinarily intelligent and inquisitive, these fur-persons are energetic and playful companions. Siamese are steadfastly loyal, being totally devoted to their owners!

Enquiries are most welcome - 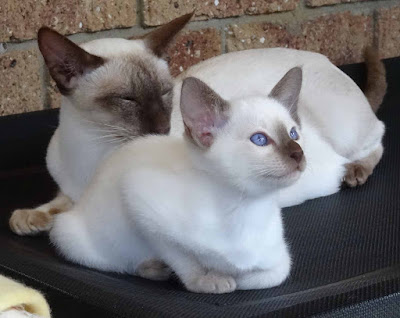 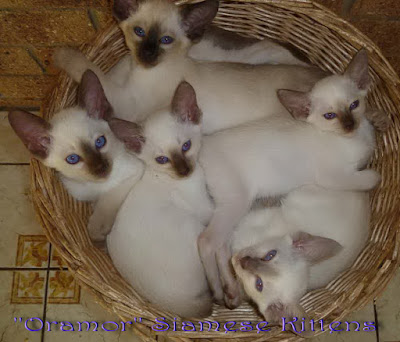 Posted by Oramor Burmese and Siamese Kittens at 16:42 No comments:

In Pursuit of Excellence 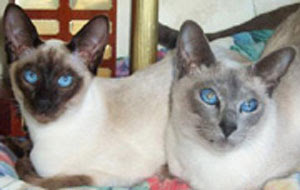 The Siamese communicates like no other and has enthralled people all over the world.  Most of the time they talk at a conversational level, and many Siamese seem to enjoy the spoken exchange with their owners.
The Siamese vocabulary can be quite extensive, much beyond meow and meow.
They are renowned for their amazing voice.
The voice of a Siamese personality has been mistaken for a baby crying!

The Siamese originated in Siam, which is the Thailand that we know today.
This breed is thought to be the oldest or one of the oldest of the Pedigree cat breeds in the world.

They love companionship with their family and will not be ignored.
Siamese will follow you around the house, go for walks, play games, traits that they share with the family dog.  Siamese form a lasting bond of affection with their owners.

So, if the image of a sleek, graceful, blue-eyed, communicative, responsive and loving feline companion appeals to you, the Siamese is your cat. 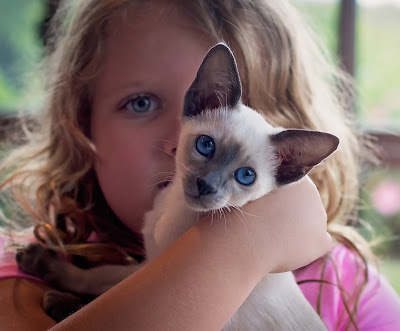 This type existed at the same time as Traditional,
being among the first imported from Siam, and are not a result of selective breeding.
Both Classics and Traditional are recognized by the TCA and many overseas organizations as the quintessential Siamese.

If you are not sure of which type of Siamese to buy, this might be a good choice for you.
This type is of medium build and has good muscular development.

The necks, body, legs and tail are slightly elongated. The ears are medium sized, the eyes are a rounded almond, there is a very small break in the nose below the eyes.
Classics have a slight wedge, neither rounded nor pointy. 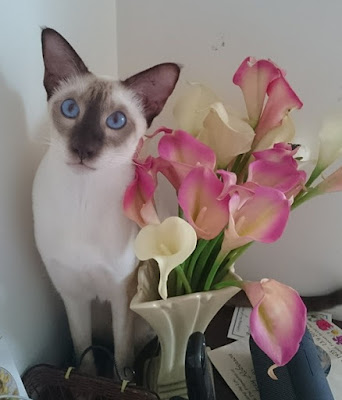 Classic Siamese   -  are the "in the middle" type.

The Siamese is for all those who want a full-on relationship with a character cat.

No shrinking violet, the Siamese both demands and provides extremely stimulating companionship.

The Siamese originated in Siam, which is the Thailand that we know today. This breed is thought to be the oldest or one of the oldest cat breeds in the world. They are renowned for their amazing voice. The Siamese communicates like no other and has enthralled people all over the world.

From an exotic past, the Siamese has become one of the most recognized breeds of cat in the world. A feature of the breed is its markings, or points of colour, on the face, ears, lower legs and tail. The body colour of the Siamese can be frosty white or cream, and the “points” range from the original seal point to tabby, tortie, red, cream, blue, chocolate and lilac point.
Whatever the colour scheme of the cat, the Siamese will always have vivid blue eyes.
Siamese kittens develop early and quickly and show an individual personality.
They are very active and dislike being left alone. They are “talkers”! One of the reasons they make such good companions is this ability to have a conversation.

Extremely intelligent and elegant, they insist on taking an active part in their owner’s lives. With such an interesting and individual personality cat you can be sure life will never be dull - they are excellent company for those wanting a loving, lively and entertaining companion....…


LEGENDS OF THE SIAMESE CAT

Foremost among these must surely be the Siamese's famous kinked tail - nowadays selected against by breeders but epitomising earlier examples - whose origin is the basis for several charming stories. For example: one warm morning a beautiful Siamese princess decided to bathe in the palace garden's cool lake, so she threaded her valuable golden rings onto the long sleek tail of her beloved cat for safekeeping until she returned.

Unfortunately, the smooth rings persistently slid down the cat's tail and seemed destined to be lost - until he cleverly crooked the tip of his tail, thereby holding them securely in place. As the day was so warm, however, the princess did not return as swiftly as she had planned - several hours passed before she came back to her faithful cat and unhooked her rings from his tail. By this time, it had become very cramped, and the cat was overjoyed at the prospect of being able to straighten it again - but when he tried to do so, he discovered to his horror that it would not straighten. It had stiffened, permanently - and all Siamese cats from then on were born with a kink in their tail.

Legend has it that the Siamese were originally temple cats and received the souls of mortals upon their deaths.

The Siamese is one of the oldest breeds of pedigree cat, and over the years many stories have been told, for the most part romantic fables, but perhaps there is an element of truth in some of them. Certainly, they add to the charm of this most exotic, oriental and somewhat inscrutable breed.

Of all the pedigree varieties, the Siamese is the most instantly recognizable.
Long, lithe and elegant, with its distinctive darker 'points', it has always had great appeal.
Early Siamese tended to have eye squints and kinked tails, now regarded as serious faults, but with careful, selective breeding they have been mainly eliminated from the modern cat. Yet, these characteristics were once so prevalent that fables exist to this day 'explaining' how they were acquired.

It is said that Siamese cats were once sacred cats, guarding the Buddhist temples.
One day, a valuable goblet went missing and a pair of the cats was despatched to find the
stolen treasure. After a long journey, the goblet was discovered and the female cat stayed to guard it while her male partner went back to tell the good news. So worried was she that the goblet might go missing again, that she wound her tail tightly around its stem and it became permanently kinked.
For days and nights she sat watching over the prized goblet, never lettering her eyes wander away, and by the time her partner returned, her eyes had developed a squint.
Later she produced a litter of kittens - all of which had kinked tails and squints, because of her vigilance in guarding the lost treasure.

Another fable relates to a Siamese princess who, fearing that her rings would be stolen, entrusted her Siamese cat to guard them, placing them on its tail for safekeeping overnight.
One night the cat fell asleep, and all the rings fell off her long slender tail and were lost forever.
The princess decided to tie a knot in the tail to stop this ever happening again; and this could be another reason why Siamese have kinked tails.


Siamese kittens have always been highly prized. It was considered an honor for any foreigner to be presented with one of the Royal Cats of Siam, and it was an offence publishable by death for one of these cats to be stolen from the Royal Court, let alone be taken out of Siam.

But, westwards they eventually came, and after many generations of selective breeding are now, along with Persian Longhairs and Burmese, among the most popular of pedigree varieties.

Siamese were originally a pale milky colour, with dark seal-coloured points on the paws, face, ears and tail. They have been known in this form for more than 200 years. In the late nineteenth century a Blue-point was recorded in the UK, but it is likely that this recessive colour had been around for some time before this.

Perhaps it was not so highly regarded in Siam, and was 'swept under the carpet' as the rich Seal-point variety was more highly prized.
Over the years, dedicated breeders have worked hard to produce other colour variations in Siamese,
but their names vary between the UK and North America.
We now have, not only the Seal point and Blue points, but Chocolate and Lilac (USA, Frost point), as well as the Red, Cream, Tortie and Tabby-points (USA, Colour point Shorthairs).

Siamese are typical of the Oriental group of cats and, like their near relations the Burmese, are a vocal breed with outgoing personalities. They are the kind of cat that you either adore or hate; they can be noisy and demanding and have a real need to be a part of the family.
To aficionados, these are the plus points and they would not wish for the Siamese to be any other way.
A Siamese does not like to be left on its own, so for anybody who is out at work all day, and only wants
one cat, this is not the breed to select.

If you want a cat that will give you life-long devotion, however, then the Siamese is for you.
Posted by Oramor Burmese and Siamese Kittens at 16:41 No comments: